Jay Wilson is one of Australia’s most talented and well established riders. With both an MX2 and SX2 Championship under his belt, the Gold Coast native will look to defend his supercross championship this year, and continue building momentum towards 2020.

When you look at last year’s SX2 Championship, then a fairly successful outdoors campaign this year, do you feel as though you’re riding a pretty nice wave of momentum at the moment?

Yeah, the thing about last year was that it was an unknown in terms of working out where I fitted in to the field, just because I hadn’t had that base and it was the first proper season that I’d done when it comes to supercross. So we didn’t really know what to expect – obviously we knew we were going to be eligible for podiums, but whether we were going to win the championship – I wasn’t sure if we could do that. So last year was really about building a base, and we were lucky in a way to walk away with that championship and that all worked out quite well. With another year under our belts, I feel as though we’re in a better position now than we were last year, in terms of bike development, myself and my fitness; we’re all in a great place.

It’s been well documented that you had a fairly turbulent entry into the professional scene with Serco, the Honda stint, Raceline and so forth, which I think highlights how important continuity is. Really when it comes to the feeling on a certain motorcycle, but also trusting the team over numerous years.

It’s so important. That was the thing with last year is that I signed my deal pretty early prior to supercross, so I knew where I was going and the direction we were heading in, so that helped out a bunch and that’s pretty much what’s happened for this year too. I’ve got the same people around me and we’ve got a good plan in place even in regards to my racing in America next year; it’s good, I believe I have the best people in my corner that I could really ask for as a team.

You look at Mike Ward (mechanic) and the amount of championship runs that he’s been apart of, and the amount of success I’ve had with him, and then also Josh Coppins who’s been a big part of my career – he’s been a world class MXGP rider – and Yamaha on top of that which is a global caliber brand with what I believe is the best motorcycle. Then finally my training partner Dan Reardon, he’s been around for a long time and is a supercross specialist, so I just believe I have a great crew around me and we’re excited to go racing. 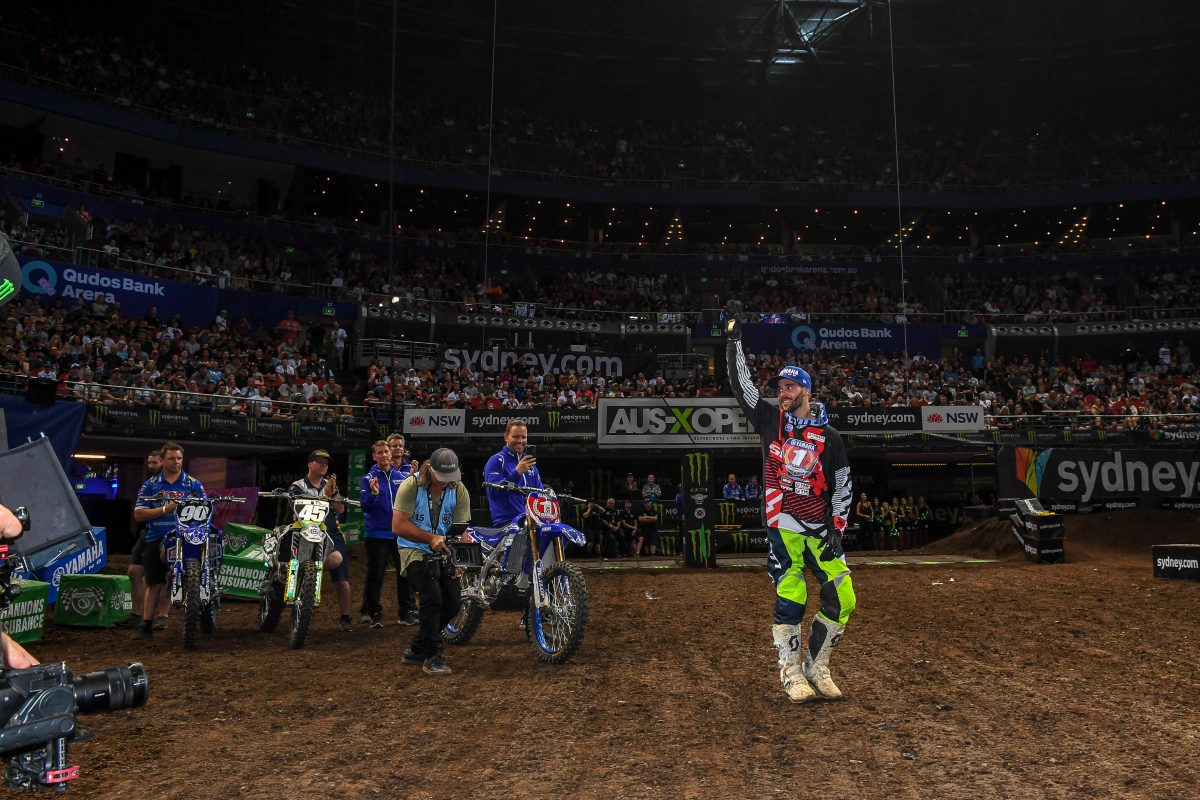 In terms of your title defense this year, is there a certain game plan you guys put together heading in, or is that irrelevant at this stage?

No, we just do what we do. Last year we started off really strong winning the first two, and we were just able to put it on the box from there on out, and finally went into Sydney with a decent points gap, which ended up saving me. But we just go and see what we can do, especially with the first round heading indoors in a tight stadium, which will be interesting – it’ll definitely be a good show for the fans. I’ve dealt with these small stadiums, and anyone who’s dealt with Arenacross style tracks is going to know what to expect when it comes to this style of racing – I raced AX in in the UK and so did Reardon, so it’s all about that track positioning and knowing those sort of tricks of the trade with that style of racing. So I think it’ll be pretty brutal, but the biggest thing is just your race craft – it needs to be on another level, so I think the first round is just going to be crazy and if we can grab some good points there, we’ll put ourselves in a good position.

Also there’s going to be quite a number of international riders in the SX2 Class, which always opens up a debate. I think it’s a really good thing because the more internationals that come out, it makes our championship more prestigious, and to win it means that you’re more respected on a global scale. You also get a much bigger audience looking at our championship, so I see a lot of benefits from that side of it.

We have a lot of Australians are out there on the global scale right now which is great for our domestic championships with a lot of eyes on you guys.

Yeah, well you just need to look at what our boys did at the MXoN this past weekend and I think a lot of people were pretty surprised. Webster rode really well, and I think we’re always underrated as the Australian team, but we go in there and no matter what the team looks like, we’re putting in solid results. Duffy at 17-years-old too put in a strong showing, and aside from the motorcycle malfunctions, we had a lot of success over there.

But when you look internationally, our riders are riding really good and I think it’s creating more opportunities for all of us, and it shows that our series’ is one of the most competitive in the world – both indoors and out. So it’s awesome that these international guys are racing our series as it opens the door for us to show what we can do, and earn a ride overseas which in the past has been very difficult to do.

You have a really strong team in your corner with (Mike) Ward, Josh (Coppins) and Dan Reardon as you mentioned earlier – do those guys offer you any advice when it comes to championships and defending?

Yeah Mike Ward, my mechanic, he’s been around so many titles. He’s been in those pressure situations quite a few times, and I wouldn’t want to go to battle with anyone else by my side. Last year Reardon was under the truck with us, so it was cool to be able to bounce stuff off him, and even riding with him – I’m always learning new things. Then Josh too, he’s a world-class rider and is always up for a chat, and I’m bouncing things off him too. So I’m lucky to have the people in my corner that I do, and obviously with the support of my family who back me 100% no matter what I do.