A double win for Supercross fans was announced today with Round 3 of the Australian Supercross Championship to be staged at the renowned GMHBA Stadium (Kardinia Park) in Geelong with Troy Bayliss Events (TBE) to host the new-look Victorian leg of the series on October 13.

Accompanying the exciting news is the announcement that Yamaha Motor Australia becomes the event’s major sponsor for Round 3 the series.

For the first time in Australia the action-packed night of Australian Supercross Championship racing will feature an all-new triple crown competition format.

Tickets from as little as $40 go on sale 12 pm Tuesday June 26 via Ticketmaster, much to the delight of the three-time World Superbike Champion Bayliss who moves into Supercross event management for the first time in 2018.

“We’re pumped to be teaming up with Yamaha Motor Australia to deliver Round 3 of the Australian Supercross Championships to the people of Victoria at GMHBA Stadium and we think this is the perfect venue for fans to get up close and personal with the sport.” Bayliss said.

“We’re expecting a big crowd down in Geelong to see Australia’s greatest Supercross talent and we’re also offering fans new ways of interacting with their favourite teams and riders through our Pit Party activation, which will be free-of-charge to anyone on the day.

“Don’t miss the opportunity to see Supercross in a major Stadium, we have plenty of further announcements surrounding the event in the coming months so be sure to grab a ticket tomorrow and get set for an awesome time on October 13.”

October 13 will be a big night in Geelong, following the Supercross, fans can spill into the CBD which will be hosting a White Night Street Festival until 2am, Geelong will be the place to be.

The Pit Party will take place outside GMHBA Stadium, providing the people of Geelong with a free-of-charge experience to rub shoulders with the teams/riders and enjoy the party atmosphere with DJs, music, autograph signing sessions and more.

Yamaha Motor Australia Director and Chief Operating Officer Brad Ryan says he’s delighted to be teaming up with TBE and the third round of the Australian Supercross Championship in Geelong.

“YMA is pleased to support Round 3 of the Australian Supercross Championship Victoria. This event offers an ideal platform for our race teams to showcase their talents from the development class through MX2 and into the MX1 category.” Ryan said.

“And now with the addition of the new YZ65, the youngest members of the bLU cRU can perform in front of the crowds. It’s great to be able to help these new racers onto the first step of the victorYZone ladder – hopefully the first step of many.”

Leading Australian Supercross star and CDR Yamaha Monster Energy factory rider Dean Ferris says he’s pumped to have the event back in the team’s hometown and is looking forward to putting on a show for Supercross fans.

“This stadium is going to be a real spectacle for the fans and for us as riders, there’s plenty of room for the track builders to shape the perfect Supercross track to hit in maximum attack mode,” Ferris said.

“Riding inside one of the top stadiums in Australia is a massive boost for the championship and makes us push even harder to put on the best show for our fans.”

Australian Supercross Championship promoter Adam Bailey says returning to the stadium under the guise of Troy Bayliss and his events crew is a massive boost for the championship.

“We’re really pumped to see Supercross return to GMHBA Stadium, another state-of-the-art facility that is sure to provide new and old fans of Supercross with some amazing racing this year,” Bailey said.

“Troy [Bayliss] and his team do a fantastic job with running events at the highest level and I’d encourage anyone, whether a fan of Supercross or not, to come check out the event in Geelong and experience first hand the excitement of Supercross racing.”

The stadium is set to create an atmosphere like no other, providing fans and corporate guests with the ultimate viewing platform and for the riders, it will be an honour to have the opportunity to ride inside the recently renovated 36,000 seat, world class AFL Stadium – home to the Geelong Cats.

“We are thrilled to have Supercross back at GMHBA Stadium. Fans will enjoy an action packed night of entertainment in front of the newly redeveloped Brownlow Stand,” Brown said.

“This is Australia’s best regional Stadium and the beating heart of the Geelong sporting community. We are excited for yet another opportunity to showcase the Stadium’s multipurpose capabilities on a national stage.”

Already confirmed for Round 3 of the Australian Supercross Championship is American Supercross star Justin Brayton and TBE are excited to announce more leading riders and guests, heading into the event.

All motorsport fans are urged to get behind the event in 2018. Interstate fans also have the luxury of flying direct into Geelong’s Avalon Airport with plenty of affordable options to fly straight to the event’s doorstep.

Motorsport fans who want to make the most of a Motorcycle filled weekend can also head to Phillip Island for the final round of the ASBK series, Sunday 14th October. Simply drive around the bay or jump on the ferry from Queenscliff. 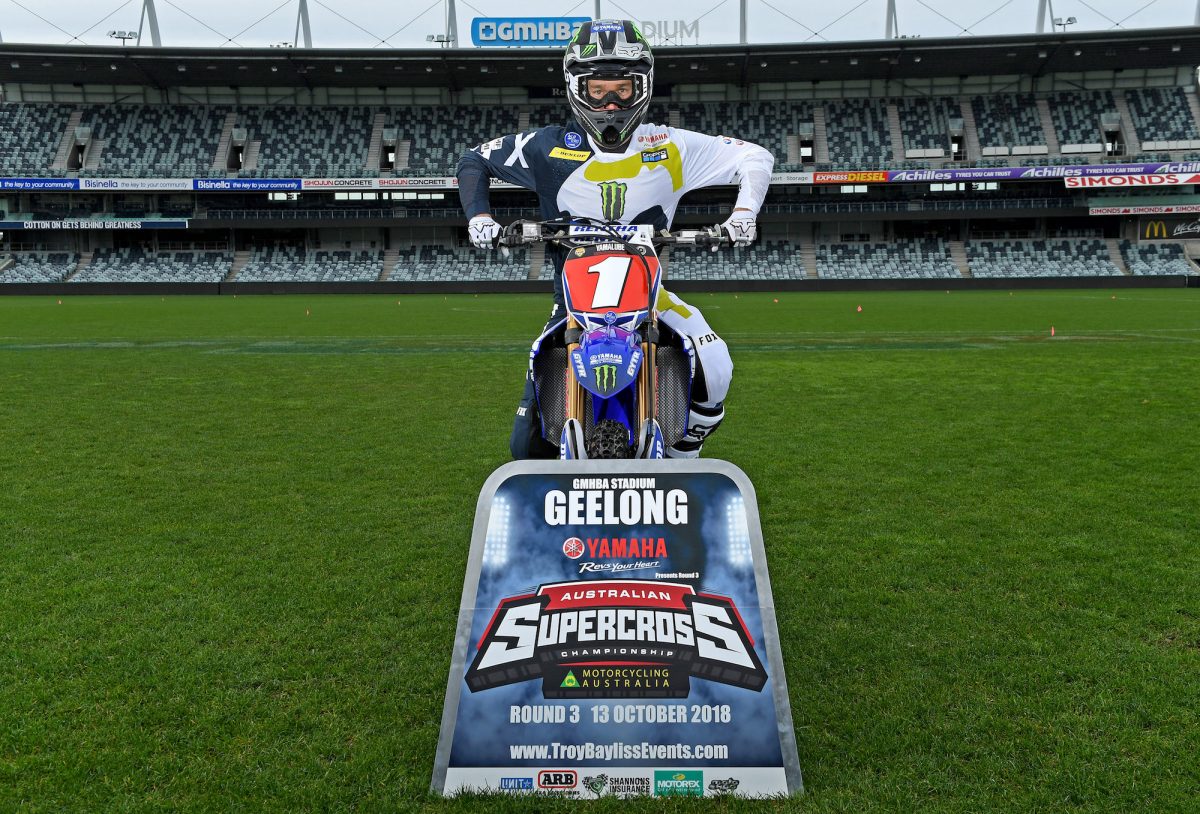